2 ‘buttons’ to press when feeding a baby wombat (and it works!) Author of children's book "Kevin the kangaroo that couldn't hop".

There are many skills needed to be learnt when living outside cities in Australia, especially if your home is way Outback or happens to be a station, which is the Australian name for a (very big) farm (some are the size of an English county, ...and often bigger!); how to fix a truck, how to round-up cattle, how to make a campfire and of course, how to feed a baby wombat...! 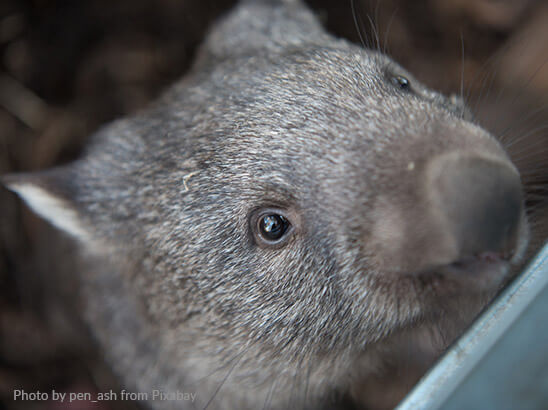 I had arrived at a remote property in the far NW Outback region of New South Wales, Australia, to collect a rooftop tent, an essential bit of kit if you’re intending camping near any river in the far North (‘Uptop’) of Australia (West Australia, Northern Territory, Queensland), due to the huge number of ‘Mr Crocodiles’ that live in and around them.

“Ok” said Steve as I arrived and jumped out of the Troopie, “before we sort the tent I need you to give me a hand with a couple of little critters: Here they are; you take ‘Number One’ and I’ll take ‘Number Two'”

It transpired that ‘Number One’ and ‘Number Two’ were a brother & sister pair of baby wombats that Steve, an NSWPWR (New South Wales Parks & Wildlife Ranger), had recently rescued when their mother had tragically been hit and killed by a car: Apparently Steve was fantastic at handling & healing animals but not the most imaginative of people when it came to naming them 😊.

“Righto” said Steve, “When we get in their enclosure just sit on the ground; I’ll collect ‘Number Two’ and just let ‘Number One’ come to you: She’ll climb up and sit on your lap, then you can feed her with the baby’s milk bottle”.

We entered the pen, I sat on the ground, ‘No.1’ hopped onto my lap, I put the bottle teat into her mouth and waited for her to start suckling.

“Nothing’s happening Steve, I don’t think she’s hungry”, I said after about 30 seconds of non-activity.

“Yes she is” replied Steve, “They always are, but you need to cover her eyes and push-down gently on her forehead!”

“Because you’ll be mimicking how they feed naturally: In the wild they’d be down their underground burrow now in the pitch black, pushing up under their mother’s tummy to get to her milk teats, which means they’d be ‘blind’ and feeling pressure on their heads; so that’s what they’re genetically wired to respond to!” answered Steve.

“Righto!” I said, though a little bit sceptically, and did exactly what he’d said; replaced the teat in No.1 ‘s mouth, softly covered her eyes with my palm and very gently pushed down on her head: She immediately began to suckle..!!!

I was so surprised and, despite the evidence before my very eyes, slightly disbelieving that I ‘tested’ the technique by relieving the gentle pressure on No.1’s head; she instantly stopped feeding, …then immediately recommenced the moment I re-applied the pressure: I even ‘experimented’ with ‘eyes covered but no pressure’ and ‘pressure but eyes uncovered’; neither worked!

Feeding No.1 Wombat was like ‘operating an electric safety-lawnmower’; you had to have both the ‘buttons’ operating together or else nothing happened… …and THAT my friends is how you feed a baby wombat! 🤓😊

Wombat is a character from our book. Click here if you want to find out more about Kevin the kangaroo that couldn’t hop

Image by pen_ash from Pixabay

We use cookies on our website to give you the most relevant experience by remembering your preferences and repeat visits. By clicking “Accept All”, you consent to the use of ALL the cookies. However, you may reject them if you wish or visit "Cookie Settings" to provide a controlled consent.
Reject AllAccept AllCookie SettingsPrivacy Policy
Manage consent

This website uses cookies to improve your experience while you navigate through the website. Out of these, the cookies that are categorized as necessary are stored on your browser as they are essential for the working of basic functionalities of the website. We also use third-party cookies that help us analyze and understand how you use this website. These cookies will be stored in your browser only with your consent. You also have the option to opt-out of these cookies. But opting out of some of these cookies may affect your browsing experience.
Necessary Always Enabled
Necessary cookies are absolutely essential for the website to function properly. These cookies ensure basic functionalities and security features of the website, anonymously.
Functional
Functional cookies help to perform certain functionalities like sharing the content of the website on social media platforms, collect feedbacks, and other third-party features.
Performance
Performance cookies are used to understand and analyze the key performance indexes of the website which helps in delivering a better user experience for the visitors.
Analytics
Analytical cookies are used to understand how visitors interact with the website. These cookies help provide information on metrics the number of visitors, bounce rate, traffic source, etc.
Advertisement
Advertisement cookies are used to provide visitors with relevant ads and marketing campaigns. These cookies track visitors across websites and collect information to provide customized ads.
Others
Other uncategorized cookies are those that are being analyzed and have not been classified into a category as yet.
SAVE & ACCEPT